First of all, happy Valentines Day to those of you who celebrate it. As I always say: “if it’s a real holiday, give me the day off.” Since I’ve had the entire year off, I guess I should hush my mouth and eat a chocolate. Anyhoo, here’s the post 🙂

Over the past year, I haven’t had the energy/time/interest to do much with my hair. Any extra time that I had, I was passed out somewhere fast asleep. When Boo Boo was three months old – and before my hair turned into a big loc – I decided to go to a hair salon and do something with it. Now, this wasn’t the salon that I normally would go to when I got my hair professionally done. This salon was significantly closer to home. With a really small baby, getting home quickly was a benefit.

Sometimes, going where you know and getting your hair done by people you trust is more important.

I decided to get it blown out straight. 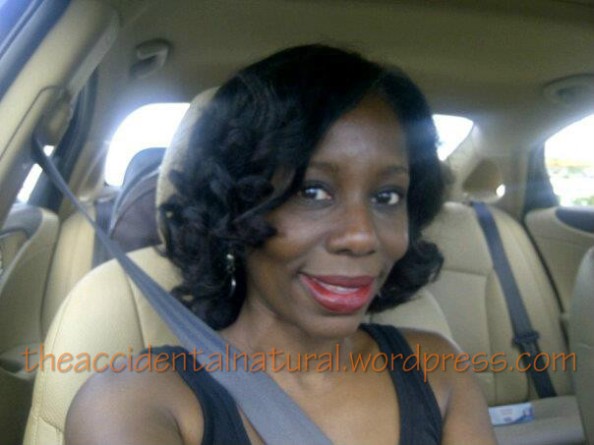 I thought it looked awesome. And there was no heat damage! So, I was beside myself with happiness. I went back in September to get a natural style done. The fam and I were heading to Las Vegas for my mother-in-law’s birthday and I wanted a style that would stand up to the heat and the dryness of the desert.

Just before Christmas, my mom decided to treat me to another salon visit. I had had two good experiences, so I assumed that I was going to have another one. Instead of the stylist I booked, the owner of the salon decided to do my hair. The first time I straightened my hair at this salon, I made it very, very clear that I wear my hair kinky. I have no interest in heat styling or anything like that. Again, I reiterated that with the owner. He assured me that he was going to hook me up with some serious heat protectant.

This is how my hair ended up:

Nice, right? Until I washed it. Sigh. I had damage y’all. I was disappointed. The owner said that I should come in every three months (right) to straighten my hair so they could deal with any damage.

No lie, my hair was a bit raggedy, but I know why: I wasn’t paying it any mind and I was experiencing good ol’ post-partum shedding. Even though that was the case, my hair was kinky and that’s what I wanted.

The heat damage isn’t horrific – not by a long shot, but my hair in general just doesn’t feel right.

This is one of the major reasons I’ve decided to loc it up. I mean, I’ve wanted to loc my hair for years and years, but I wanted to see what my hair could do loosely natural. So, now it’s time for something new.

I made my appointment for March 7.