I’ve visited the Niagara Region–specifically The Falls–many times over the years. Each time an out-of-town guest would plan a trip to my parents’ former home in Montreal or my place in the Toronto area, the first thing they would say is, “Can we visit The Falls?”

Yeah, sure, I guess.

The Falls are spectacular, but all the stuff that surrounds them–especially Clifton Hill–leaves a lot to be desired, unless you like hokey. When I got older, we would always drive through Niagara-on-the-Lake on our way home from the Falls. We’d stop at a couple of wineries and pick up a bottle or two and then head home. For all the time that I spent looking at Niagara Falls and wandering through gift shops, I never really explored Niagara-on-the-Lake, Ontario.

Niagara-on-the-Lake is a quaint town that is home to Ontario’s wine country. Earlier this year, the girls and I wanted to do a trip at the end of summer. We had contemplated Las Vegas, New York City, Miami…but after enough stories of Canadian travelers being harassed at the US border, we decided to stay close to home.

If you’re flying, you can arrive in Toronto, Hamilton or Buffalo and rent a car so you can explore the area at your leisure. I prefer drive–or be driven–because you then have the freedom to visit the places and wineries you want AND you aren’t tied to someone else’s schedule. If you don’t want to drive–’cause you and all your friends want to enjoy the wines–you can take GO Transit’s seasonal summer service to Niagara (June 22 to September 3) and spend a day or a weekend. You can also take a day tour bus. I’ve never taken one, but you can just Google the term and a bunch of options pop up. The girls and I drove and it was about two hours from downtown Toronto using the QEW.

Niagara-on-the-Lake is known for its quaint bed and breakfasts, cute inns and relaxing spa resort hotels. We stayed at Pillar and Post–one of Vintage Hotels four properties in Niagara-on-the-Lake–a gorgeous five-star country inn. The Vintage Hotels website has a number of packages that you can choose from to give you a discount for Pillar and Post, Queen’s Landing, Prince of Wales, and Moffat Inn.

Pillar and Post was lovely. From the neighbourhood it’s in to the indoor and outdoor pools, it was the perfect place for us to stay. The hotel is away from the busy downtown area, but in walking distance. So, we could enjoy the area and then head back to our hotel in a quiet neighbourhood. (In all honesty, it’s not like Niagara-on-the-Lake is a zoo, so there’s quiet and quieter. So, no matter where you stay, you’ll be fine.)

Now, this is the fun part. We started planning our trip to Niagara earlier this year and the first thing we wanted to do was visit some area wineries. We were pleasantly surprised that the hotel offered complimentary wine tasting tours. Unfortunately, the afternoon tour was sold out, but they didn’t disappoint: they gave us vouchers for free wine tastings at a couple of wineries. We headed off to the first one, Chateau des Charmes (1025 York Rd., Niagara-on-the-Lake, ON L0S 1P0).

We sidled up to the bar for our tastings and were educated on the ins and outs of wine. Who knew a proper tasting would take so long? We were on the clock because we had a reservation for tea at the Prince of Wales Hotel. On our way back to our hotel to change, we stopped by Wayne Gretzky Estates Winery & Distillery (1219 Niagara Stone Rd, Niagara-on-the-Lake, ON L0S 1J0). I didn’t know that the hockey legend had a winery. Lemme tell you, it’s gorgeous. Like absolutely gorgeous. We were staging an imaginary wedding on the grounds because it was so pretty…and they have lots of wines to choose from. 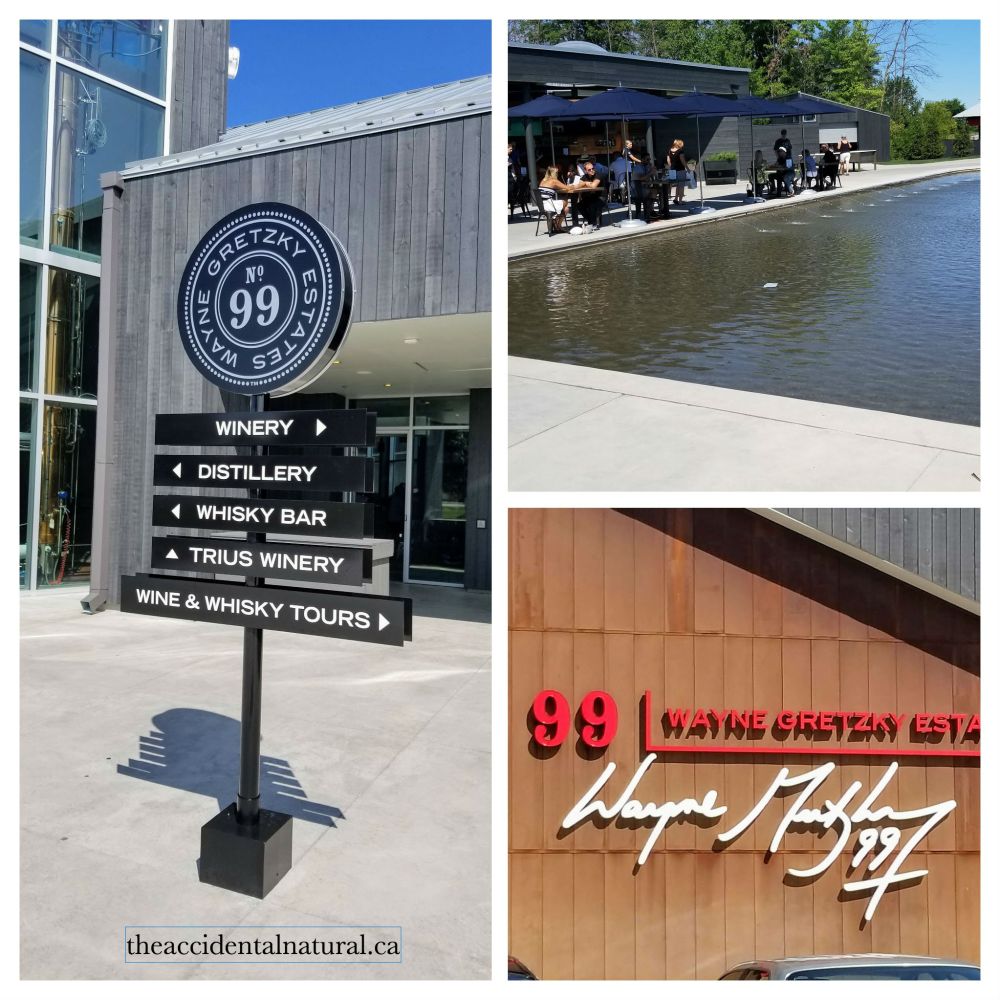 Because this was just an overnight trip, we had to get it moving. We had reservations at the Prince of Wales Hotel for high tea (6 Picton Street, Niagara-on-the-Lake, ON Canada, L0S 1J0). I’ve done high tea a number of times at several places and, while this wasn’t my favourite tea service, it was nice. The tea room was the epitome of charming. There were plush, comfy chairs and couches, coffee tables and china tea sets that made you think that you were invited to someone’s house and enjoying a spot of tea in their living room. The server was delightful and the place just had ambiance. If you’re up for that kind of thing, do it! Next time, I’m going to wear a fascinator.

After being up early and traveling, we were tired. We decided to stay in the for the evening and enjoy the hotel’s amenities, namely the pools. First thought was the outdoor pool because the weather was amazing…but it was busy and really, who wants to fight for a pool chair? We chose the indoor pool and it was quiet and peaceful. We spent the next two hours talking, laughing and chilling.

We had reservations at 9 am at eSkoot Niagara. What’s that you ask? Electric scooters! After a quick tutorial, the girls and I were on the mean streets of Niagara. And this was the most fun I’ve had on the road. Once I got the hang of it, I was off and scooting all over. We took off to the Queen St.—which is downtown—and made a couple of stops before continuing on to the Fort George Historic Site (51 Queen’s Parade, Niagara-on-the-Lake, ON L0S 1J0) and along the Niagara River Parkway. Hands down, it was an absolute blast and I’ll be renting my eSkoot again the next time I’m in Niagara. 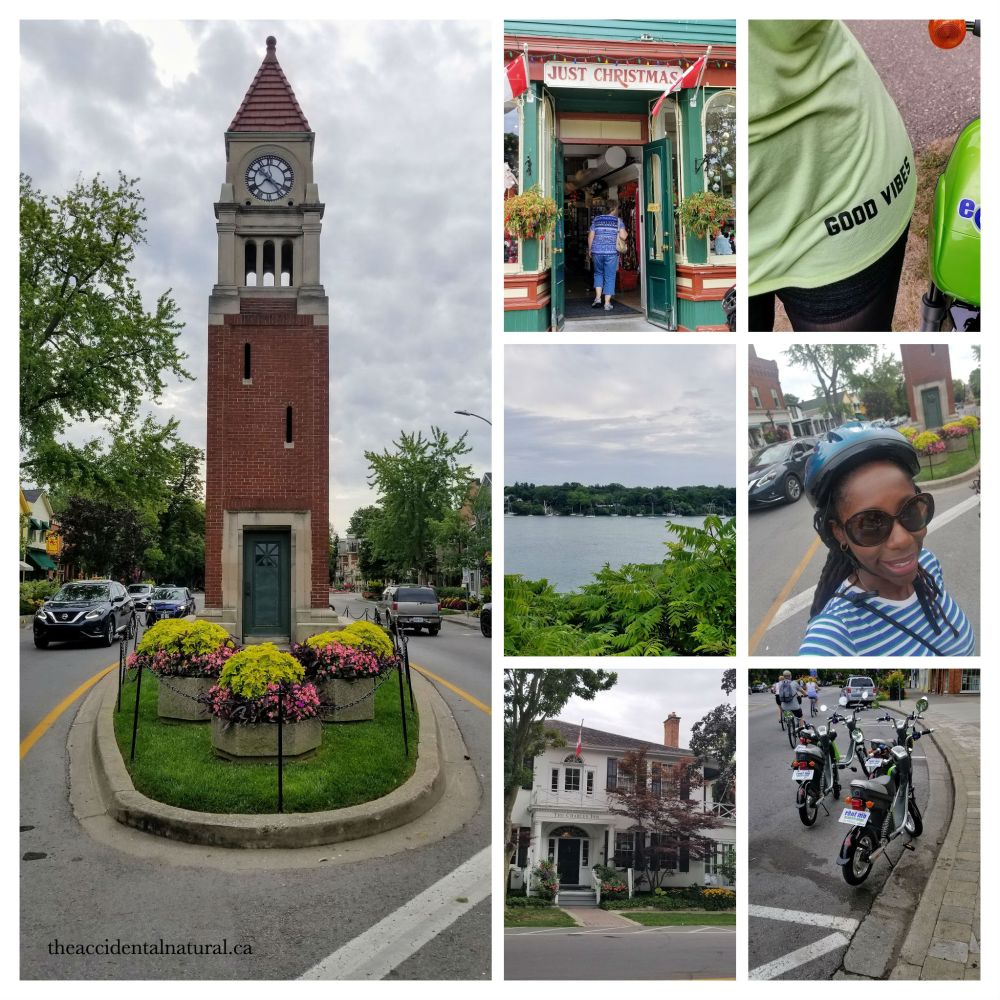 After our adventure, we stopped for brunch and perused Queen Street, looking at all the cute shops and buying some Niagara Region specialities…and some other things. The sky was getting dark and it was getting late. We visited two more wineries, Two Sisters (240 John Street East, Niagara on the Lake, ON, L0S 1J0) and Peller Estates Winery and Restaurant (290 John Street East, Niagara-on-the-Lake, ON, L0S 1J0) and then finally made our way back home.

It was a great trip—short and sweet. If I had to do it again, I would definitely stay another night. I feel like I only scratched the surface of all the fun things we could have done and the places that we could have visited—maybe dinner at one of the wineries with a wine pairing, definitely an afternoon at the spa. But for a weekend trip? It was awesome. Who’s up to do it again?