If you haven’t read the first part of our Disney trip post, head over to that post first and then come back over here!

When we exchanged our email for our tickets at the ticket counter, we received ‘First visit’ buttons. Let me say this: Disney knows how to take care of their guests. Although it was hot and we were in line for 20 minutes in the heat, the ticket person was delightful. The girls, Hubby and I were beyond excited. From the ferry boat, we could see Cinderella’s castle in the distance—our first view of the Magic Kingdom. So excitement level was at 10 for all of us, but the kids were handling it pretty well.

The ferry docked and we got off in a semi-orderly fashion and followed the crowd to the gates.

It was a journey into time and it was already approaching 100 degrees outside with humidity. We get to the gate and you have to tap your card and scan your finger—which was fine for all of us, except for Daughter #2 who was a very independent, but short, three-year-old. The park employees are super helpful and got us in and that’s where we started our adventure.

Pre-planning for the Disney trip
Let’s rewind a bit.

Tip: Bring non-perishable snacks from home for the park. We traveled with granola bars, fruit gummies, Rice Krispie treats, Goldfish crackers and instant Quaker Oatmeal packs. The less you have to spend in USD, the happier our Canadian pockets were.

We didn’t stay at the park, we were at a timeshare (and I think if we were, I would have don’t the same thing and brought snacks from home with me). Anyhow, we needed milk, breakfast food, water and juice boxes for our adventure at the parks, we went to a super Wal-Mart that was across from our home base to get some perishables, water, and juice boxes.

We thought we’d go in, grab a few things and be back out in like 20 minutes.

Let me tell you how the place was an absolute zoo. I have never seen so many people in a store—it was worse than Black Friday, y’all. It was ridiculous. The food was picked through and there were so many people there you couldn’t see anything. What should have been a quick shopping trip ended up being about an hour with miserable, tired children who needed to go to bed.

Tip: Be prepared for the Wal-Mart madhouse. I don’t know if Wal-Mart is any less crazy in the morning or afternoon, but I would not go in the evening—especially if you have little ones with you who are tired after a day of traveling and excitement to see the Mouse and his friends the next day. Wal-Mart allows you to order your food in advance and pick it up when you arrive. This is the way to go.

Magic Kingdom, here we come!
OK, to the parks!

I knew that the Magic Kingdom is big and spread out—we planned two days at the park to get the full experience, with a day at Hollywood Studios. We walked along Main Street, USA that has shops and some restaurants. It leads you straight up to Cinderella’s castle. The park is split into quadrants: Fantasyland, Tomorrowland, Frontierland, and Adventureland. On our first day, we were spending most of our time in Fantasyland and Tomorrowland and our first ride was Dumbo The Flying Elephant.

Tip: Get the stroller. Yes, your kids are big and are able to walk around and don’t need a stroller. Trust me. They need it. Yes, I’m Canadian, but I know hot and it is hot and you get tired out. If I’m overheating and in desperate need of air conditioning, what about the three- and seven-year-old? Yeah. They can’t move as quickly, there are a lot of people and they get tired out. It was expensive (I think $30 USD for the double stroller), but it was worth every penny.

Let me be honest: the rides are fun, but we’ve all been to an amusement park. The rides that we were able to go on were no more fun than what we’ve ridden at Canada’s Wonderland—aside from the Tomorrowland Speedway (which was hot as fire and I thanked God we had a FastPass+ for that one because even OUTSIDE of the attraction, you felt the heat building from the asphalt and the exhaust).

For those of you who are traveling with little kids, you’re not going to be blown away by rides. It’s not that they aren’t fun, but for us, they weren’t the highlight of the trip. The highlight, my friends, is the Disney experience.

Tip: Don’t expect to be blown away by the rides. There are spinning teacups, rollercoasters, bumper cars, etc.—just like what you’d see at any amusement park. The joy of Disney isn’t the rides. The joy of Disney is in the parades, the characters performing, the people who work there who do everything in their power to make you and your family feel like you are truly somewhere special.

After doing research about how to attack the park, my thoughts were to not push ourselves and make ourselves miserable. I knew what the girls could handle and, like I said, I wanted them—and all of us—to enjoy the wonder of the park. We did our FastPass+ reservations and then headed over to Tony’s Town Square Restaurant for a nice Italian lunch.

We did the Tony’s Town Square Restaurant Festival of Fantasy dining package ($54 for adults and $19 for children ages 9 and under; tax and gratuity not included). Each dining package comes complete with an appetizer, entrée, dessert and non-alcoholic beverage, along with a VIP viewing voucher.

Was it worth it? I’m of two minds—I liked (loved) getting out of the heat and humidity and having a nice lunch on our first day at the park. The food was good and the portions were big. What I didn’t love? The VIP viewing area was uncovered. We had a great vantage point to watch the parade, but Disney, we need some shade and somewhere to sit. 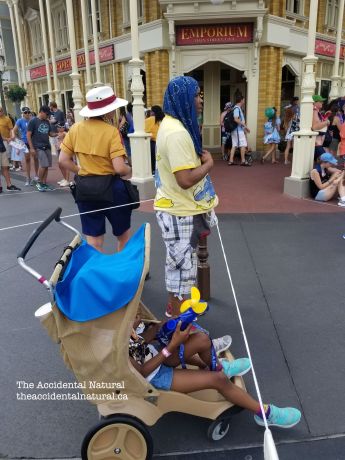 Hubby took over the cooling towel to cool his bald scalp. What we learned was to wash it out at night, soak it in water, and put it in the freezer overnight. Next morning? Cool as a cucumber. Twenty minutes later? Hot.

Tip: Bring an umbrella—not just for rainy afternoons. Umbrellas will become your best friend and shelter you from the weather, be it the sun or the rain. Just stick a mini one in your backpack and call it a day.

All I can say is thank God for the stroller—at least the kids were protected from the sun and had somewhere to sit.

The parade was LIT. It was the perfect way for us to celebrate our first day at the Magic Kingdom and at Disney. All the characters, princesses, animatronic floats, dancers, music—it was everything Disney that I expected.

We had two really sweet moments at the parade. Princess Tiana singled out the girls and waved at them and blew them kisses. As a Black mother raising Black daughters, representation in the princesses matters. For them to see a Black princess and getting love from her was amazing (more on Tiana in my next post!). The Hubby wasn’t really down for dressing in our Disney t-shirts but agreed to it if he could wear a Donald Duck t-shirt. Well, when Donald and Daisy saw him they lost it and were jumping up and down, pointing and carrying on. And Hubby? Ear-to-ear grin. He was a seven-year-old boy at Disney in that moment.

Overall, the parade was amazing, all 12 minutes of it. 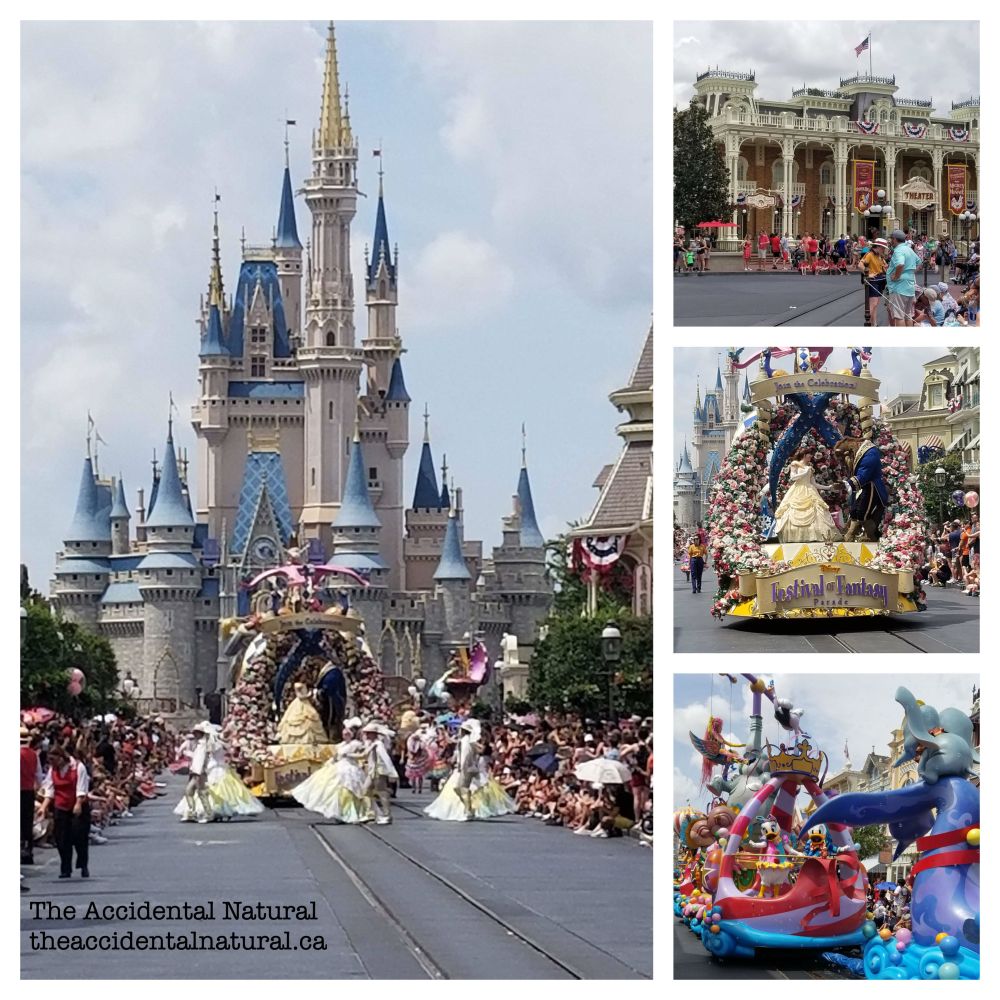 We did a few more rides and then left the park and went back to home base. Why you ask? The girls wanted to dress up in their princess dresses and we were going to head back to the park for fireworks.

You can do the Biddidi Bobbidi Salon, but we were on a budget and the salon experience was out of the budget. Not to worry, one of the girls’ aunties bought them princess dresses from the Disney Store at Toronto’s Eaton Centre and we pack them. Daughter #1 was Rapunzel and Daughter #2 was Belle. We dolled them up—hair in buns, lipgloss and glitter and we went back to the park around 7:30 pm, after a thundershower.

Tip: Bring rain ponchos! Not only is it hot, but it rains ALL THE TIME in Central Florida. But the good thing is that although you’re soaked, it’s so hot you dry off in 10 minutes or less.

The folks at Disney made the girls feel like actual princesses. From “Hello Rapunzel! You look beautiful!” to “Belle! You made it! You look wonderful!” Even the other people at the park stopped and told them how fabulous they looked. It was truly a magical night for them. 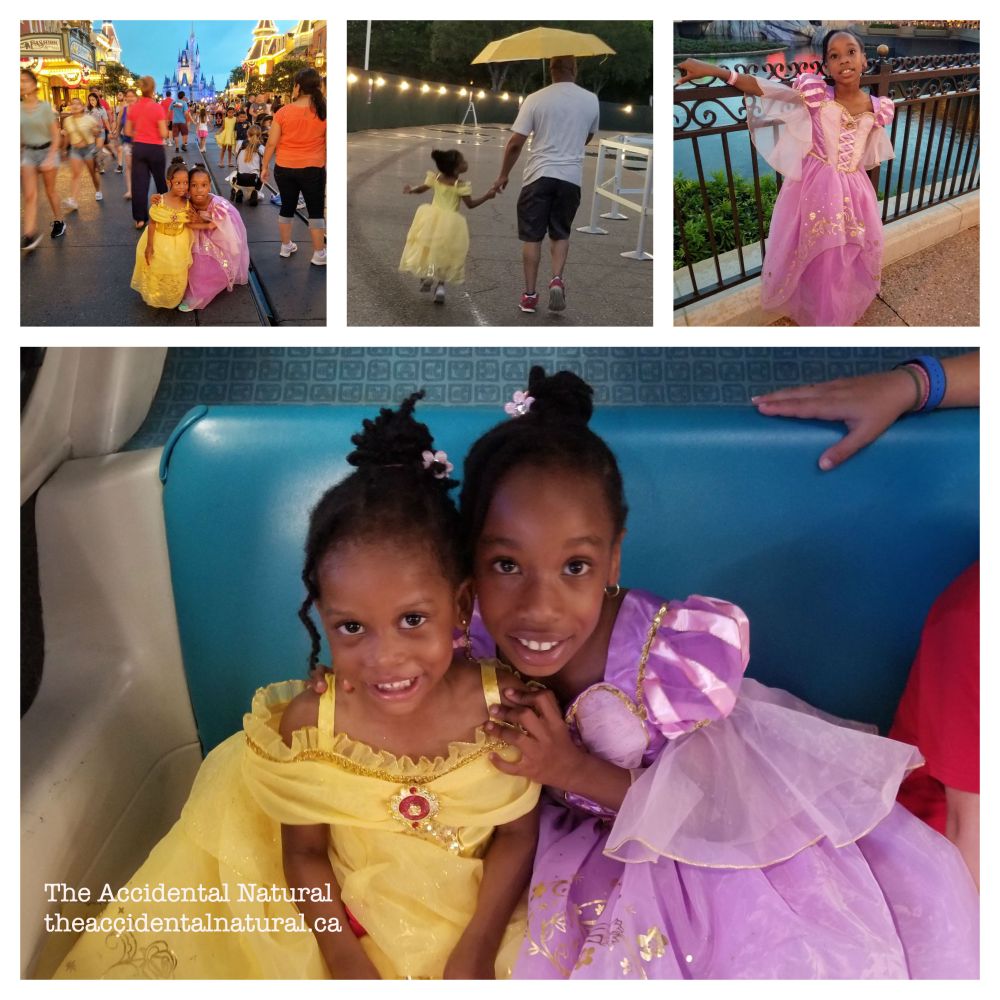 Rain did not stop the fireworks. Ponchos on and we searched for a good spot to watch them. That was a bit difficult because of the sheer number of people milling around. Disney does have a fireworks dining plan—there’s a dessert party and then the fireworks. It seemed like a good idea, but when I looked at the price, it didn’t feel like I would get as much for my money as we did with the parade dining plan.

We found a spot, watched the fireworks display—maybe 30 minutes?—and then we were all released into the stores on Main Street, USA because the park was closing…or so we thought. Hubby was talking to someone, as he likes to do, and heard that there was a secret show that happens after the fireworks show.

I’m not gonna lie, your girl was TIRED. My feet were tired. My back was sore. And I just wanted to stretch out and go to sleep, but like I said, RIDE THE WHEELS OFF. So we stayed for the show and it was fun. The girls had a great time, but Daughter #2 was wiped. We, along with thousands of others, headed to the monorail.

This is the line? All of this humanity? Oh lord, will we get back to the car?

In Part 3, do we ever get back to the Transportation and Ticket Center? Do we make it to Hollywood Studios? How the heck do I get all this glitter off of these children?