If you haven’t read Part 1 and Part 2, make sure to do that before joining us for Part 3 of our first Disney trip!

So, after the secret show at Magic Kingdom, everyone and their mother was trying to get out of the park because it was really closing time. It was about 11:00 pm and we were exhausted.

Tip: Know your limitations. Although our motto was RIDE THE WHEELS OFF, we clearly pushed it too far our first night at Magic Kingdom. If you have older children, maybe you can pull off a late night, but with little ones? We should have left after the fireworks show because no one wants to carry 30 lbs of dead weight and no one wants to drag 50 lbs of miserable child.

We got back to the Transportation and Ticket Center (TTC) around 11:45 pm and to our car by 12 am. We got some fast food, got back to home base, brushed our teeth and collapsed. Sore feet, sore backs, but with visions of Disney World dancing in our heads.

Those were my sentiments when my alarm went off at 7 am. Thankfully, I had some forethought to start our day a little later, so we didn’t have a FastPass+ scheduled until later in the morning. I turned off that alarm and went back to sleep for another hour.

Tip: You will be tired, so be gentle with yourself. These parks are big. You do a lot of walking and it is hot. You will be wiped by the time you get back to your hotel or timeshare. By day 2, you’re still excited, but the adrenaline has worn off and the tiredness from travelling and spending an entire day at a park will knock you over. Just start a little later on your second day. You—and your children—will thank you for it.

Finally we got up, got ready, and left home base for our seven minute drive to Hollywood Studios. 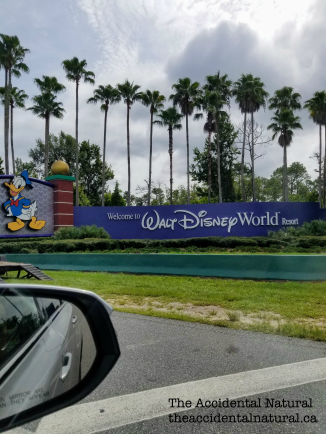 Tip: Stay close to the parks. There are hundreds, maybe thousands, of places to stay outside of Disney World. If you’re not staying at the parks, stay nearby. Our timeshare was perfectly located by restaurants, souvenir shops, and Disney World. We were less than 10 minutes away from Magic Kingdom and Hollywood Studios. Who wants to drive 30 minutes? (Unless your accommodations are free. If you’re staying somewhere for free, yay you!)

Unlike the Magic Kingdom, there is no TTC to get to before getting to Hollywood Studios. You just drive into their parking lot and jump on a shuttle. We got there and excitedly hurried over to the shuttle to take us to the front gate.

I didn’t really know what to expect and from what I read online, I was worried that I made the wrong decision to do Hollywood Studios. We got our double stroller (remember the discussion from Part 1), started heading up the Streets of America and guess who we saw?

Donald Duck! He was doing a meet-and-greet and there was a pretty short line. We joined it and within 15 minutes, we were posing with Donald. We were excited to see how the girls squealed and hugged Donald—I was pretty amped, too, I can’t lie.

Do you have kids who love Disney characters? Well, Hollywood Studios is the place for you. Over the course of the day, we saw and met Mickey and Minnie, Vampirina, Fancy Nancy, Olaf, Star Wars storm troopers, Doc McStuffins, Little Bo Peep, the Green Army Patrol, Forky, Jessie, Woody and Buzz Lightyear from Toy Story. The girls got autographs with a bunch of characters and they were so excited to have a souvenir from their Disney World experience.

Tip: Get your FastPasses for Toy Story Land. Listen to me clearly: if you don’t get a FastPass+ for Toy Story Land, expect to wait FOREVER to get on the rides. There are like three rides in Toy Story Land and they are all popular but some are more popular than others. Toy Story Land’s Slinky Dog Dash was one of the most popular rides for the kids. The wait time for that was up to 120 minutes. In the heat. Without shade. Yeah, no.

The beauty of Hollywood Studio was the character interactions. The girls had a blast seeing characters walking through the park or speaking with them. They even helped Vampirina clean up her room…too bad they don’t do the same thing at home. As for rides, the Alien Swirling Saucers were the highlight of their day, followed very closely by the Disney Junior Dance Party. The girls loved everything—there wasn’t one ride or experience that they didn’t enjoy and had jokes doing.

The night before was long and there was no way that I wanted another long night. The girls were getting surly as tiredness started to set in. We began our long walk back to the front gates when a woman stopped us and asked us if we had heard about Fantasmic! I had—it was on the list of things that I wanted us to do, but because of the long night that we had the day before, we were going to skip it.

Do you know that woman gifted us VIP tickets for the show? Praise God and let’s go! The girls got a second wind and we spent the next hour watching Mickey fight off a bunch of villains in a fireworks and light show. It was awesome. Daughter #2 was a bit scared because of the scary villains and all the fire, but she handled it like a G.

Now it’s about 10 pm and we make our way to the gates to head home. We did a good eight hours—a full workday—in the park and it was time to go home, put up my feet and go to sleep.

Umm…but where did we park the rental car? Hubby? Bueller? SOMEONE!

In our haste to get into the park and start enjoying the magic that is Disney, we didn’t take any time to note where our vehicle was. So the four of us were wandering around the parking lot looking for an unfamiliar car. We tried to sound the alarm, but nothing. So, I’m thinking someone stole the damned car, the girls are getting antsy and grumpy as we wait and Hubby decided that he was going to go on a journey to find our vehicle.

Tip: Never be in too much of a rush that you don’t note where you park the damned car. Thank God that the Hollywood Studios parking lot is smaller than Magic Kingdom’s, but it’s pretty dang big. We spent a good 30 minutes trying to find the car. I was grumpy and annoyed by that point. I mean, we had spent an entire day and night walking, I wanted to sit. When Hubby pulled up—the car was parked a few lanes down from where the shuttle dropped us off—I was never so happy to sit down and get back to home base.

For our last day, we were back at Magic Kingdom as pros with the My Experience app, transportation and more! Breakfast with Mickey, Lilo, and Stitch, our journey to Agrabah, all the princesses your heart desires, find out what we did on our last day in the final instalment of our Disney World blog.